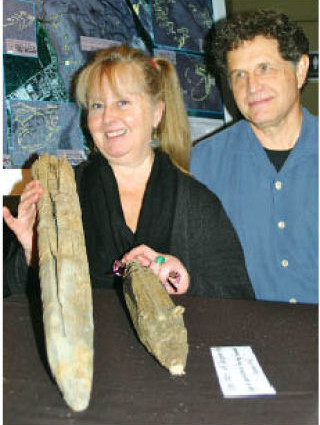 By Lindsay Chung – Comox Valley Record, Published: December 02, 2010
“There are thousands of wooden stakes sticking out of the mud in Comox Harbour.
The stakes are the remains of a large aboriginal intertidal wood stake fish trap site, which is creating a lot of excitement in the archeological world and in the community.
Archeologist Nancy Greene has spent seven years studying these fish traps with her husband David McGee. Tuesday night, they shared their latest research with members of the Stick in the Mud Club, who sponsored the radiocarbon dating of 46 stakes.
Conservatively, Greene and McGee estimate at least 150,000 stakes were pounded into the sediment in the Courtenay River Estuary.
Greene and McGee collected 11 wood stakes from trap features for radiocarbon analysis in 2004, and the sampling of the additional 46 stakes funded by the Stick in the Mud Club have allowed them to broaden the scope of the research.
“With all of these new dates particularly, it just nails it really,” said Greene. “We have now 57 dates altogether, which is unprecedented. This new batch of dates, the 46 that have been now sponsored, they extended the range of dates another 200 years. Now we have a date that is just 10 to 20 years before the first European settlers came into the Valley, 1840s more or less, and then the earliest date is around 1360.”
Greene has been amazed by the community support for her work.
“The study has truly been a community-based project, and that puts it in a league of its own in the world of archeology,” she said. “Such widespread community support for this type of research is very rare and is a testament to our community’s understanding that the estuary is not only a valuable centerpiece for our community’s life but also a highly significant archeological and heritage resource that appears to be the largest and most technologically sophisticated prehistoric fishing site in North America.”
Fifty-seven wooden stakes have now been carbon dated.
“These 46 stakes that the Stick in the Mud Club have so generously sponsored allowed a whole range of questions to be answered about the dates of the traps and how the traps functioned and not only that but the scale of the fishery,” said Greene.
“It’s the biggest, most significant intensified fishing site so far recorded in Canada. Each date helps to tell the story of this very important archeological site and how First Nations people lived along the edge of the estuary and effectively and sustainably managed an intensive fishery for well over a thousand years.
” As a former academic, Project Watershed board vice-chair Paul Horgen — who was the evening’s master of ceremonies — was “just blown away” when he heard Greene speak about her research in 2008.
“It is a monumental study,” he said. “I think it’s probably one of the most important ones done in archeology in the last 50 years, and we should all be very proud of this effort.”