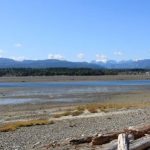 Kent Leontowich of the Comox Valley Regional District’s Planning Department is coordinating a steering committee that includes members of Project Watershed’s Estuary Working Group.  In 2000, a Courtenay River Management Plan (CREMP) was released but  never adopted by any of the local governments.  In 2009, when the Regional Directors of the Comox Valley Regional District put a moratorium on development along the Dyke Road and other parts of the Estuary in the Regional District, they also directed CVRD staff to update the 2000 CREMP to reflect the situation as we enter the second decade of the 21st century. Times have changed and local governments are cooperating.  The Courtenay River Estuary plays an important role in the Regional Growth Strategy soon to be adopted for the Comox Valley and Management Plan updating is underway.
The Courtenay River Estuary Management Plan Steering Committee was put together including representatives from the relevant provincial and federal ministries, BC Nature Trust, Ducks Unlimited, Courtenay Fish and Game Association and Project Watershed.  Planning Manager Tom Knight often joins the group at its sessions as the team reworks the original sections of the 2000 document and adds important new sections like Archeology and Climate Change.  The group has been meeting every 5 or 6 weeks for over the past year and the draft document is anticipated to be completed by March of 2011. It then will go to the governments of Comox, Courtenay, Cumberland, the CVRD and K’omoks First Nation and the public for consideration and final approval.
You can see the original CREMP here on the Regional District’s website.  Watch Project Watershed’s News Bulletin or the CREMP page on our Keeping It Living website for updates as this important local government-community initiative moves forward.