By Ralph Shaw – Comox Valley Record
Published: February 03, 2012 7:00 AM
Baynes Sound is a huge sea garden area that has produced food for  Comox Valley residents for thousands of years. The picture with this column features natural produce from the waters of the sound and land-based agriculture from our garden which is on the uplands above the sound. 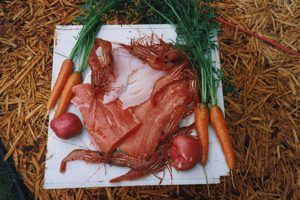 In my Jan. 13 column I noted that it is about 30 kilometres from Goose Spit to Chrome Island light. To further illustrate the size of the aquaculture garden, if you were to kayak around the perimeter of the sound you would travel approximately 100 kilometres. The productive aquaculture zone is of varying width, depending on species, but it would stretch from Cumberland to Nanaimo. It produces local seafood for which it has an international reputation. Oysters, littleneck clams, butter clams, cockles, scallops, and geoducks are some of the major aquaculture products of this fertile area.
In their book Oysters – A Connoisseur’s Guide and Cookbook, Lonnie Williams and Karen Warner list 64 species of oysters in North America. One of note is Crassostrea gigas: “Fanny Bay, British Columbia. A firm oyster that is very salty and sweet with a pronounced cucumber flavor finish. The fluted shells are thick, which makes them easy to open.” As long as we pay attention to the purity of the water it will produce this unique species of shellfish into the foreseeable future and continue to be a source of jobs for hundreds of local Valley residents.
Over the past few years we have had a series of industrial accidents that have led to the destruction of rich seafood producing coastal regions. The oil spill of the Exxon Valdez is still affecting the coastal waters of Alaska. Last year we had the terrible tragedy in the Gulf of Mexico with the British Petroleum offshore drilling rig that has decimated much of the marine and shellfish industries of the area. Acid mine drainage has created sterile rivers and lakes in the coal mining regions of the Eastern United States. Meanwhile in the Comox Valley we have paid a high price for the acid mine drainage into the Tsolum River.
To celebrate the bounty of Baynes Sound, the Ocean of Plenty II Shellfish Gala Dinner will be held Feb. 11 at the Fanny Bay Community Hall. Doors open at 6:30 p.m. dinner at 7 p.m. This year’s event is donating all profits from the dinner, silent and live auctions to the CoalWatch Comox Valley group who are gravely concerned and alarmed about the possibility of a coal mine on the drainage basin of Baynes Sound.
I share their concerns. At the time of this writing there are still a few tickets left for this gala seafood dinner. The tickets are $50 each and may I be so bold as to suggest that they would make a great Valentine gift for your significant other – after all, oysters are reputed to be exceptionally healthy food for Valentine celebrations.
If you wish to see copies of the menu go to www.coalwatch.ca. Tickets are available from Laughing Oyster Books and the Freaking Coffee Shop in Courtenay, Blue Heron Books in Comox, Fanny Bay Oysters in Buckley Bay, and Abraxas Books and Gifts on Denman Island. For more information phone John Snyder at 250 335-2246.