By Philip Round – Echo Staff 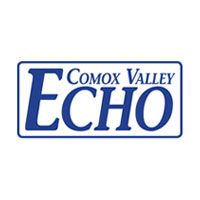 Pictured at the agreement signing alongside the Courtenay River Estuary on Tuesday are, from the right, Vancouver Island University President Ralph Nilson, the chair of Comox Valley Project Watershed Society Paul Horgen, B.C. Environment Minister Terry Lake, and Comox Valley MLA Don McRae.
Research probing the potential of the Courtenay River Estuary to capture carbon dioxide from the atmosphere is to move forward with the help of a $30,000 provincial grant.
B.C. Environment Minister Terry Lake was at the estuary wildlife viewing area on Comox Road on Tuesday to sign a memorandum of agreement with the President of Vancouver Island University, Ralph Nilson, and the chair of Comox Valley Project Watershed, Paul Horgen.
The three-way partnership is intended to produce a better understanding of how coastal communities can combine action on climate change and improvements to coastal ecosystems while at the same time securing economic benefits from such activities.
So-called ‘blue carbon’ is the carbon dioxide naturally absorbed from the atmosphere and stored in the marine environment through plants like eelgrass, sediment and even shellfish.
Some people believe the marine potential for sequestration is even more significant that that known to exist through land-based plants and trees.
Horgen said eelgrass meadows were disappearing from coastal estuaries as a result of pollution, logging activities, habitat destruction and burial, and their disappearance represented a loss of an important carbon sink.
“Restoration efforts have economic and climate adaptation benefits and provide a key wildlife habitat – a hat trick for the environment,” he suggested.
“We look forward to working with the Province and VIU to make the Comox Valley blue carbon project a local effort with international ramifications.”
Nilson agreed, suggesting research and restoration efforts “will not only have a positive local impact but potential global application in mitigating climate change.”
It was early days but, he suggested, the three partners could “collectively do some very exciting things.”
And Minister Lake said there were hundreds of estuaries large and small in B.C. alone, and if the research produced positive results, tremendous opportunities could be opened up.
“The money today is relatively small, but the potential applications and benefits are huge,” he commented.
Comox Valley MLA Don McRae added: “Blue carbon is the point where ecological restoration, greenhouse gas reduction and climate change adaptation converge.”
He praised Horgen and regional district Area B director Jim Gillis for pursuing the issue and helping prepare the information that had enabled him to put the case for research funding to his government colleagues.
pround@comoxvalleyecho.com
http://www.comoxvalleyecho.com/article/20130412/COMOX0101/304129960/0/comox/estuary-blue-carbon-initiative-wins-30000-grant