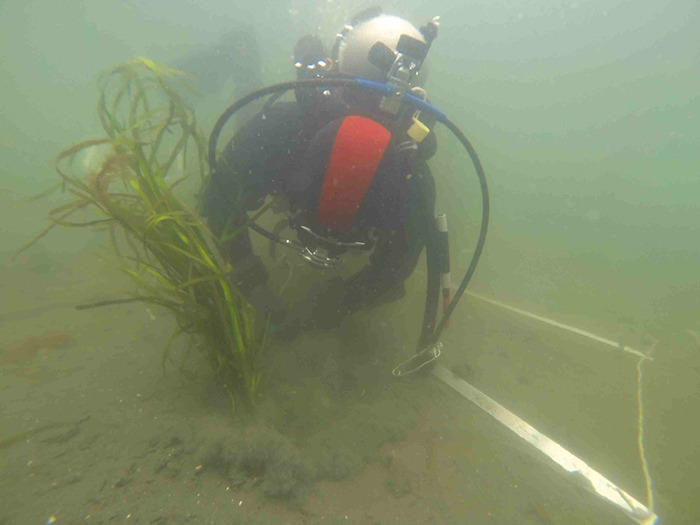 A diver plants an eelgrass shoot in a bed as part of efforts to restore natural habitat at Goose Spit Marina. Photo by Lora Tryon

19 Wing is restoring marine habitat near Royston as compensation for the habitat affected by the maintenance dredging of the Goose Spit Marina that took place in January.   The dredging was required to remove sediment that built up around the pilings and threatened dock infrastructure and the safe use of the marina by various Canadian Armed Forces and Sea Cadet vessels.  “Dredging needed to be done to restore the capability of the marina,” said Maj. Mark Kierstead, 19 Wing construction engineering officer. “The project’s planning team consulted with K’ómoks First Nation and obtained approvals from several government agencies to ensure the project would be successful and environmentally responsible.”
19 Wing environmental staff developed the project’s mitigation and compensation plan after extensive discussions with local environment experts, including Project Watershed, a local charitable organization that promotes stewardship of local watersheds.  “Over the past few years Project Watershed has been involved with smaller eelgrass restoration projects and also created aerial eelgrass density maps of the entire K’omoks Estuary,” said Dr. Paul Horgen, Project Watershed’s Chairman of the board of directors. “This data has proved valuable to the Department of National Defence.”  The eelgrass harvesting and transplant work started on May 28 and will continue for four weeks. Working from a boat, a surface team prepares and tallies the eelgrass and a team of scuba divers transplants as many as 1,500 shoots a day.  “We will create over 3,000 square metres of new eelgrass habitat near the Trent River Estuary,” said Bob Allan, 19 Wing environmental officer. “We are very pleased to partner with Project Watershed because they have proven success with this specialized habitat restoration work.”  19 Wing will monitor the health and recovery of the habitats for the next five years to ensure the success of our project.
— 19 Wing Comox