Project Watershed’s Upstairs Downstairs Gala of the 2015 Keeping It Living Campaign was a fabulous evening in which people from all around the Comox Valley came out to support the protection and restoration of the K’ómoks Estuary. Approximately 100 people attended the event and enjoyed local food and drink including: 40 Knots Wines, Gladstone Brewing Company Beer, Hollie Wood Oysters, Go Mango samosas and pakoras, Natural Pastures cheeses, as well as Thrifty Foods and Quality Foods platters. 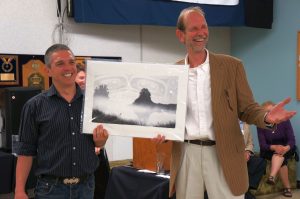 Northwest Coast Artist Andy Everson gave a K’ómoks First Nation welcome and told an inspiring story about his artwork “Stillness”. Project Watershed Chair Paul Horgen reviewed the exciting projects the organisation is involved in and showed off some footage of the estuary captured with drone technology.
61 artworks by 33 artists were on display for the evening with minimum bids ranging from $20 – $2000. “We are overwhelmed by the support from the art community this year” said Jennifer Sutherst, Estuary Coordinator. 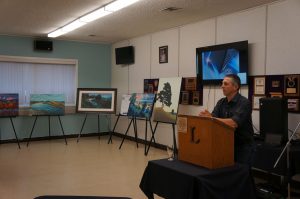 The Live Auction turned out to be an exciting event during which bidding resulted in 4 out of the 5 artworks being snatched up. Popular local restaurants Atlas Cafe and Zocalo Cafe contributed to the excitement by putting down $250 each towards the minimum bid of the artworks. The great deals on the artworks made the top bidders and Project Watershed feel like winners.

The 5 artworks in the Live Auction had been juried from the 61 that had been submitted to the campaign. The three jurors Phil Whyte, Elizabeth Russell and Sheila Pollock selected the artworks for the live auction based on criteria including its adherence to the estuary theme, how inspirational and evocative it was as well as composition and design. Project Watershed would like to thank Pieter Voster of Continual Palingenesis for being the auctioneer for the evening. Continual Palingenesis is also this years biggest business sponsor with a $600 contribution to this year’s campaign. 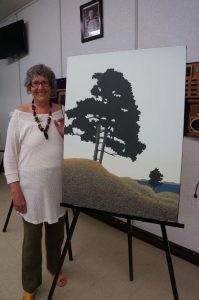 “This is shaping up to be one of the most successful Keeping It Living Campaign yet; 20 of the 61 pieces in the silent auction currently have bids” remarked Nancy Morrison, artistic director. Everyone can get in on the great art and support Project Watershed as the silent auction runs until 12 noon Saturday the 30th. Bids can be placed at the Pearl Ellis Gallery in Comox where the art is currently exhibited or online at projectwatershed.ca/keeping-it-living-2015-auction/.
People can also support Project Watershed’s work to restore and protect the estuary through Andy Everson’s Stillness limited edition prints. There are three different prints available at different sponsorship levels. Each print is signed by Andy Everson and comes with a story. For more information and to order visit Project Watershed at 2356a Rosewall Crescent or check out our Keeping It Living page at www.keepingitliving.ca.