Quoting the great New York Yankee hall of fame catcher Yogi Berra, “Its deja vu all over again.”
In an announcement released on Wednesday, January 20th, Both NASA and NOAA (National Oceanic and Atmospheric Administration) reported that 2015 was the warmest year since global temperatures were first recorded. During the same week last January, the same message was reported for 2014. These two US based agencies report that globally the high temperatures were fueled by record El Niño and its affect on climate change. In 2015, the month of December became the first month ever to increase 2 degrees F. In most of North America, December was more like March or April.
Despite this global information, the hottest year on record did not apply to Canada. According to Environment Canada, Atlantic Canada was one of the only regions on the planet that had cooler-than average temperatures last year. Canada only experienced the 11th warmest year on record in 2015.
This data helps illustrate a weather year that was influenced by both a powerful El Niño in the Pacific Ocean and what NASA describes as global climate change “largely driven by increased carbon dioxide and other human-made emissions into the atmosphere.” 2015 averaged 14.79 degrees C, the hottest since 1880 when records began. That beats the previous 2014 record by roughly one quarter of a degree.
In the United States, December was both the warmest and the wettest on record—no other month has ever held both distinctions for the country. This was reflected most dramatically in the California Central valley where record rain falls occurred following several years of drought to this major agricultural area. We feel this locally at the grocery.
Canada’s average temperature from Jan. 1 to Dec. 31 was up 1.3 degrees Celsius from the historic average measured over the last 68 years. We did experience massive regional temperature swings, including record-breaking averages across British Columbia and the third-warmest year on record for the southern Prairies. Atlantic Canada, however, was one of the very few regions on the planet that experienced a colder-than-average 2015.
Weather experts like bookies are already predicting that 2016 will surpass 2015 as warmest year on record. Can we do anything at home to mitigate this trend? Local Stewardship groups and governments can make a major difference by considering and encouraging changes in our daily habits and long term planning for land use and natural resource management following the precautionary principle.

We can become an important component in the solution rather than a major factor in the cause of climate change. 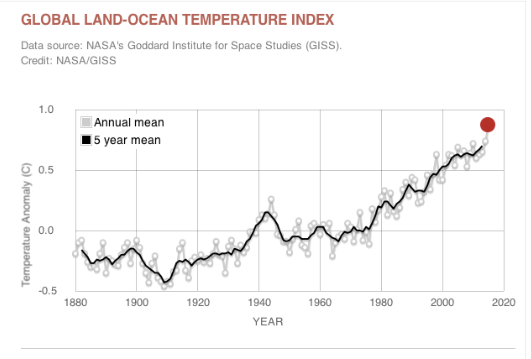