There’s a New Newt in Town 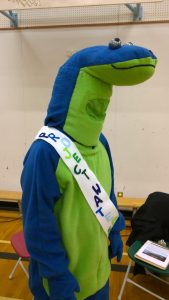 Project Watershed’s  larger than life sized newt mascot debuted at the Royston School Keeping It Living Award Ceremony on Friday the 18th (Scroll down to enter the name our newt contest!). Royston School received the award for their contribution to salt marsh planting near the Royston Wrecks. The ceremony was held in the auditorium for the grade 1’s and 2’s. The newt got a warm welcome and everyone was excited to shake its hand and give it high fives. 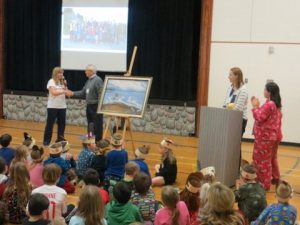 Unfortunately, the newt has no name. So we are inviting children of all ages to put their thinking caps on and name our newt!

The child with the chosen newt name will win a newt visit to their classroom or other children’s event and a stuffed newt toy as a memento.