– Earth Day Edition Comox Record, Feature by Paul Horgen, Project Watershed Board Chair, Professor Emeritus University of Toronto
One of the key components of the “Salmon Highway” from the ocean to the rivers and streams where the fish lay their eggs are marine forests of kelp. This kelp along with the seagrass (eelgrass) that are found in the estuary, along with channelized marshy shorelines, provide refuge for the salmon as they migrate in their yearly cycles. In discussions with the elder residents of the Comox Valley, they describe extensive kelp forests off Cape Lazo in front of the Willemar Bluffs prior to the mid 1960’s. These kelp forests were present when the K’ómoks estuary was one of the prime sports fishing areas on Vancouver Island. This distinction slowly faded with time and the development of industry along the estuary shores, dredging of the estuary, booming of logs in the estuary and the installation of force main sewer pipes in the estuary. 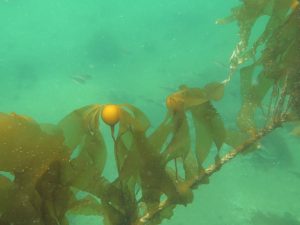 Most of the kelp is now gone. Many people have reported that there was kelp harvesting in either the late 60’s or mid 1970’s. This has been a reoccurring topic of the Estuary Working Group of Project Watershed since it was developed in 2009. None of the members of this group which represents over 14 stewardship groups and government agencies could provide definitive evidence of what happened or if kelp harvesting simply was an urban myth for the Comox Valley.
Wayne White of the Estuary Working Group and the Tsolum River Restoration Society recently did some extensive research on the topic of kelp harvesting in the area off Cape Lazo. “The first attempt at commercial harvesting of marine plants in British Columbia was undertaken by the Canada Kelp Co. Ltd. in 1949. Financial complications led to the failure of this endeavour and no further harvesting operations were initiated until 1967, when nearly the entire coastline of British Columbia was subdivided into 44 harvesting licenses collectively granted to six companies. Two of these never initiated development of their operations, and the remaining four (Sidney Seaweed Products, North Pacific Marine Products [bought out by Kelpac Industries], Pacific Kelp Co. and Intertidal Industries) either failed to reach the harvesting phase or experienced financial difficulties and were operational only briefly. The one exception was Sidney Seaweed Products, a manufacturer of algae-based agricultural products that experienced small-scale economic success from 1965 to 1974.”
White also found a report from the BC Research Council for the Industrial Development Service of the Department of Fisheries of Canada entitled “The General Status of the Seaweed Industry in British Columbia” dated December 1967. This report lays out the regulations for kelp harvesting including not cutting any more than 5 ft. below the surface and leaving a 50 yard strip the width of the bed for every mile harvested. It also lists six licenses which had been issued at the time including one to the Sidney Seaweed Products for harvesting in Areas 14, 17, 18, 19, 20 and 21. Cape Lazo is in Area 14. An appendix to the report shows an inventory of kelp areas with Cape Lazo’s 21,000 tons being the only area listed in the southern zone (Campbell River to the Gulf Islands).
There is enough anecdotal and documented evidence to indicate this urban myth has validity and Sidney Seaweed Products could well have harvested off Cape Lazo in the late 1960’s or early 1970’s. Local resident Len Evert in a communication to White,” Wayne – I remember clearly seeing a kelp harvester making passes along the Radford – Point Holmes beaches and I believe it was either 74 or 75. At the time I lived on Lazo road and my recollection is that I only saw it on the one day, however it covered a lot of mileage in short order”. Estuary Working Group historian and long-time resident, Norma Morton, reports, “one of my relatives, who did some of the kelp harvest, but stopped because he realized he was destroying the seabed. Kelp harvesting was also done at Malcolm Island and the islanders were furious, according to one of my old school friends”. Norma also suggested that some kelp harvesting occurred off Goose Spit in the 1970’s.
Local biologist Lora McAuley reports after discussions with a local fisherman that a kelp harvest occurred back in the 70’s, and resulted in the loss of all the kelp in the area of Comox Bar. He also believed it made space for the invasive wireweed to move in preventing kelp from re-establishing. Project Watershed Chair reports his neighbours Pat Dahle, Pat Guillo, and Gordon Olsen, former fisherman, all clearly recall kelp harvest in the 1960s or 1970s.
Project Watershed, under the direction of Technical Director Bill Heath has been involved in establishing kelp in the estuary and in Baynes Sound and Lambert Channel. Because of the gradual increase in water temperature, Heath and team will be planting kelp varieties taken from other BC locations that have water temperatures more in line with what we now experience in our local waters. “We are helping bull kelp to adapt to climate change in our local waters by selecting resilient stocks to recolonize historic kelp habitats.”
Soon it will be Earth Day. The idea of Earth Day was conceived in 1969 and the first official Earth day was in 1970. “A major activity on Earth Day traditionally has been planting trees” says Paul Horgen of Project Watershed, yet at the first Earth Day in 1970, our University student association planted a plastic tree to symbolize the lack of government policies to protect the Environment. Forty five Earth Days have been celebrated and many symbolic real trees have been planted in the Comox Valley in our estuary. Project Watershed has planted blue forests of eelgrass and bull kelp to honour the tradition of Earth Day, yet governments, including our local governments, still seem to not give enough consideration to the environmental issues that make Earth Day an important reminder that we all should be stewards of our environment, and for us to make sure our amazing K’omoks Estuary is thriving and healthy for Earth Days to come.