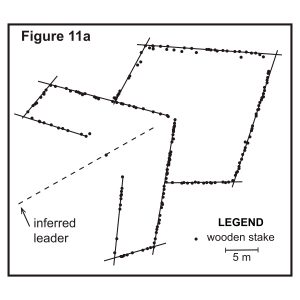 Come help recreate a bit of history. Project Watershed in collaboration with the K’ómoks First Nation Guardian Program and Holbrook’s Heirloom Woodshoppe is constructing a model of an ancient fish trap based on Figure 11 from The Comox Harbour Fish Trap Complex: A Large-Scale, Technologically Sophisticated Intertidal Fishery from British Columbia written Nancy Greene, David McGee and Roderick Heitzmann. “While we were building this model for the K’ómoks Estuary Seafood Dinner on June 15th, we realized we would need a trial run before the main event and Elevate the Arts seemed like a great opportunity to involve the community” commented Outreach Coordinator Caila Holbrook “Recreating an ancient fish trap is going to be both an artistic and scientific endeavor and it fits the Elevate tagline “culture – collaboration – community – comox valley”.
The model will be approximately 1/8 the size of the one presented in Greene’s paper which means it should be about 9ft wide and 18ft long! It will be a Winged Chevron Trap made from mostly cedar and fir.
Project Watershed is asking anyone who wants to participate in the construction of the Fish Trap to come down to Duncan Avenue in downtown Courtenay on Saturday June 4th between 9:00am and 11am. “We will start building around 9:00am and go until we are finished” reported Holbrook. The Fish Trap will be built between 5th and 6th on Duncan street near the Comox Valley Art Gallery and be up all day.
The archeology paper is available at: The Comox Harbour Fish Trap Complex: A Large-Scale, Technologically Sophisticated Intertidal Fishery from British Columbia