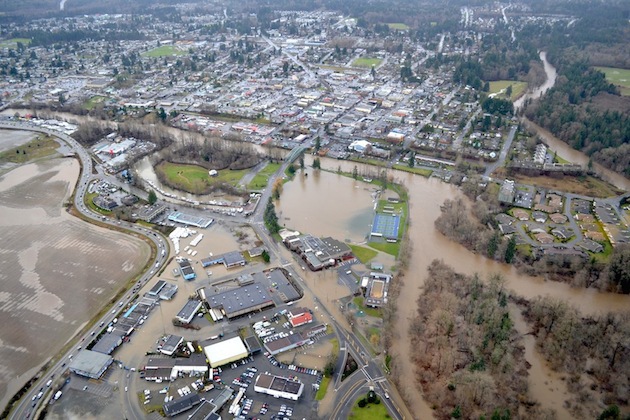 Courtenay should just go with the flow when it comes to flood management.
Project Watershed representatives gave a presentation to city council last week about “natural flood relief” options.
But one of the biggest opportunities to go that route became water under the bridge some 37 years ago.

That’s when the Comox Valley Citizens Traffic Advisory Committee went to B.C. Supreme Court in May, 1980 seeking an injunction against the adjoining roadways to the 17th St. bridge, yet to be finished.
“The group says the road will act as a dyke on a flood plain,” reported the Comox District Free Press.
Mr. Justice W.H. Wallace threw the petition out in July, 1980 saying the petitioners had “no reasonable claim.”
The citizens committee effort was spear-headed by then-Comox alderman Alice Bullen, who had started her opposition to the 17th St. bridge project in 1977.
“These dogged actions – and I say dogged because they remind me of a bulldog with a bone who won’t let go – should be condemned,” thundered Comox Mayor George Piercy.
Comox alderman Bill Vincent told Bullen that if he were the mayor of Courtenay he’d punch her in the nose.
But, Bullen and her committee, which included engineer Ian Potts, turned out to be right about road work affecting the flood plain.
“When Highway 19a and the 17th Street bridge were built, the road fill and the bridge abutments restricted the flood flow to the west side of Comox Road and Highway 19a and created choke points in the river channel at the 5th Street and the 17th Street bridges,” said the briefing note last week from Project Watershed.
Councillor Doug Hillian noted that the matter had been discussed with the highways ministry at the Union of BC Municipalities conference last year. Upgrades are apparently being planned for the “bypass”, which is part of the problem.
Mayor Larry Jangula added that Highways recognizes the bypass is “like a dam” and they “need to punch holes in it”.
Project Watershed director Don Castleden, and Wayne White, of the Tsolum River Restoration Society, told council that “natural flood relief” was the way to go in future.
They said short-term fixes, such as the “tall wall” recently installed by the city and the rip rap installed near the Fifth St. bridge to protect two buildings there, actually cause more problems.
Castleden said Project Watershed supports the concept of “managed retreat” from the floodplain – as buildings become old and need to be replaced, they’re not.
The entire concept rests on “working with nature … for the purpose nature intended” and focusing on flood relief, rather than flood protection.
“The reconnection to and rehabilitation of the old natural floodplain could help to minimize the depth of flooding and reduce subsequent property damage,” said the Project Watershed briefing note.
Project Watershed recommended that the city impose a moratorum on further building in the floodplain, and to compile a list of properties to be considered for purchase that are in high risk areas for flooding.
“I don’t know where the financing would come from,” said Jangula about the recommendation to buy buildings.
But Councillor Doug Hillian said he thought Project Watershed was “bang on with the suggestions”.