Project Watershed forges ahead during the month of August with the major restoration project at Simms Park.  This project involves the reworking of an off-channel habitat area for fish within a tidally influenced section of the Courtenay River.  The existing off-channel was poorly constructed and did not function effectively.  We are in the process of creating and installing culverts which will create a “bypass” for the normal salmon highway which will provide better connectivity between the River and the Courtenay Slough through the Park.  “This will improve access for fish seeking refuge from high river flows and predators” comments Jennifer Sutherst, PW staff biologist. The plan includes enlarging a pond which is set up for public viewing during fish migration.
This involved draining the existing pond and salvaging the various fish and amphibian species at the site.  Project volunteers recorded over 7 different species of fish, amphibians and other organisms which were salvaged.  All these species were relocated to equivalent habitats outside of the work zone, with the exception of invasive bull frogs, both juvenile tadpoles and adults, which were found at the site and disposed of.
In order to improve the hydraulic functioning and water quality at the site, PW volunteers and City crews are working together.  “Working in coordination with the City of Courtenay, we are installing two large culverts which will allow daily tidal and river flow through this area which we are referring to as a ‘salmon highway bypass“, comments Technical Director Dan Bowen. He was happy to see the second 2.4 m diameter X 16.5 m long culvert installed.
New Officers Announced
In conjunction with our Simms restoration activities, this summer at our July Board meeting, directors decided on the PW Society Officers for 2017-2018. 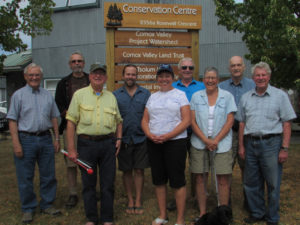 These volunteer directors include Paul Horgen as Board Chair, Bill Heidrick as Vice Chair, Brian Storey as Treasurer, and Don Castleden as Chair of the Estuary Working Group.
The Technical Portfolio is held by Directors Dan Bowen and Bill Heath, the Fundraising portfolio has been taken on by new Board Member Kathy Haigh, and the Volunteer and membership portfolio is held by Barbara Wellwood.  Tim Ennis is Director at Large.  He, along with the Vice Chair and Estuary Working Group Chair, make up the Acquisition Committee interacting with the corporation who owns the decommissioned sawmill site.  “These negotiations are proceeding extremely well” reports Board Chair Paul Horgen.
Fundraising Dinner
Finally, to end the summer, the Society is holding a fundraising dinner and wine tasting at 40 knots winery on Sept 9.  “This fantastic event will include a traditional First Nations dinner catered by Cory Frank, and entertainment by a new group called Watershed performing an original musical piece, “Our Estuary”,” said Kathy Haigh, one of the evening’s organizers.  More than half the tickets are now sold, so get them while they last!  Specifics of the evening can be obtained on line at www.projectwatershed.ca or by phoning the Conservation Centre at 250-703-2871.