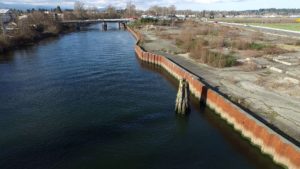 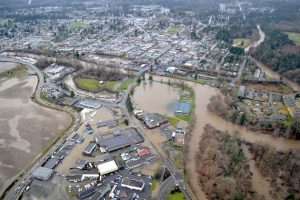 “The K’omoks First Nation has long looked forward to regaining our traditional cultural sites throughout our unceded traditional territory,” explained Rempel. “Kus-kus-sum has been a site of cultural significance to our people since time immemorial as a place where we put our ancestors to rest. Restoring it to its natural state is a vision we share with Project Watershed.”
The City of Courtenay stands to gain significant benefit from the project including the attenuation of flood impacts that will come from the restored site’s ability to absorb floodwaters.
“We also gain the rehabilitation of fish habitat, the addition of park land and the enhanced esthetic value upon removal of the current blighted landscape,” said Council. Doug Hillian, who will act as project liaison along with Rebecca Lennox. “I look forward to the opportunity for the City to hear more about the specifics and to consider next steps.”
In June 2017, Council unanimously supported a motion agreeing in-principle to share in ownership of the property alongside KFN. “The City of Courtenay’s Council and senior staff, have been incredibly supportive of this project, and we are certainly grateful for this support,” stated Bill Heidrick, Director for Project Watershed. 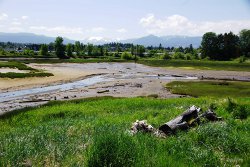 “Now that we have agreed on the basic parameters of a deal, we need to negotiate a contract of purchase and sale and work towards removing conditions,” explained Ennis.  “This will involve negotiating specific details with the City, the Nation and other governments with jurisdiction in the estuary. From there we will need to roll up our sleeves and begin fundraising in earnest.  We have a limited amount of time to raise the funds required to complete the purchase and restoration work.  Failure to do so could see the property go back on the market. The total project cost is estimated at $6.5M.”
Project Watershed is committed to restoring the decommissioned site with a view to returning the site as much as possible to its natural state, preserving it for future generations. “We have been successful at securing funds from federal, provincial, private and international funding agencies to support the conservation and sustainability of many vital areas in and around the Comox Valley. We are confident in our ability to protect and support this site’s ecological integrity once it is rehabilitated,” stated Dan Bowen, Technical Director for Project Watershed. 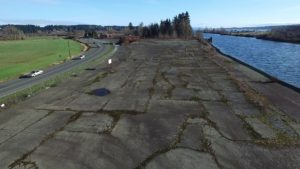 “Over the next several years, by submitting grant applications, and obtaining contributions from local businesses, residents and service groups we will bring together the resources needed to achieve this vision.  It will be a total community effort”, states Project Watershed Treasurer Brian Storey.  Project Watershed Director Kathy Haigh, and Chair Paul Horgan are heading up the fundraising committee.  “Ultimately, we seek to un-pave a parking lot and put up a paradise”, says Haigh.  “We have established a local fundraising target of $500,000 towards that end, and hope to bring in the balance from Provincial, Federal, international, corporate and other private donors”.
The Comox Valley Project Watershed Society and the K’ómoks First Nation looks forward to updating the public, as more information is available about this land purchase. Project Watershed invites the people of the Comox Valley to help launch this initiative at our Keeping It Living kick-off event sponsored by The Old House Hotel and Spa, 5:30pm on Sept 21st on the lawn in front of Local’s restaurant on 1730 Riverside Lane.Event Information and RSVP