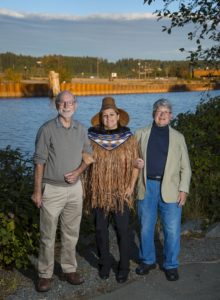 Representing the three partners in the project, Courtenay Councillor Doug Hillian, K’ómoks First Nation Chief Councillor Nicole Rempel and Project Watershed chair Paul Horgen pose for a photo at the estuary, across from the sawmill site that will be restored. Photo by John Bonner.

Official launch of Kus-kus-sum project draws a crowd, and thousands of dollars
Dignitaries from Project Watershed, K’ómoks First Nation and the City of Courtenay addressed the crowd, and thanked everyone for the interest shown in the project.
“I was really gratified, even inspired by what so many people had to say,” said Project Watershed board chair Paul Horgen. “I thought [Courtenay councillor] Doug Hillian made a great [speech], as did a number of other people.”
As was announced in the Comox Valley Record Thursday, Sept. 14, Project Watershed and the K’ómoks First Nation have reached an agreement with Interfor Corporation to purchase and restore the former Field sawmill site on the Courtenay River near the 17th Street bridge.The City of Courtenay is reviewing opportunities to take on the role as landowners, with KFN, once the acquisition is complete.
The goal is to restore the decommissioned site, returning it as much as possible to its natural state, and preserving it for future generations.
The name for the property will be Kus-kus-sum, in tribute to the village that sat across the river from the site, before the settlement of the Comox Valley.
The kick-off event was also the official fundraising kick-off, and Comox Valley residents showed their philanthropic ways, donating more than $20,000 to the cause in the first day.
“We raised about $23,500,” said Horgen. “It did exceed our expectations [for the kick-off]. It was quite gratifying to see that.”
The entire project is estimated at $6.5 million, and the local fundraising target is $500,000.
“We’ve got a fundraising committee in place, and more fundraising activities will be announced in the near future,” said Horgen. “It’s pretty exciting.”
“It is ironic that First Nations are being asked to buy back land that we stole from them, as settlers,” said Janet Fairbanks – one of those in attendance who took the opportunity to speak. “So I think everyone should consider trying to make a donation as part of our move towards reconciliation.”
“I think that weighs in with how a lot of people feel about this,” said Horgen. “It’s all about reconciliation.”
To donate to the project, or for more information, call 250-703-2871, or email projectwatershed@gmail.com
[/av_textblock]
[av_video src=’https://youtu.be/MdxL9Vqliiw’ format=’16-9′ width=’16’ height=’9′]
[av_textblock size=” font_color=” color=” admin_preview_bg=”]
Special thanks to Shane Philip of Island Soul Films for the video production.
www.islandsoulfilms.com