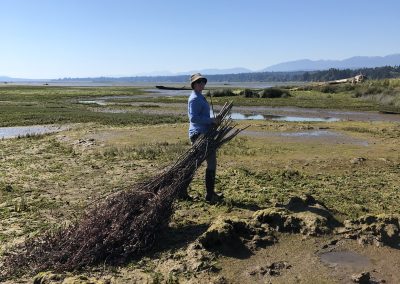 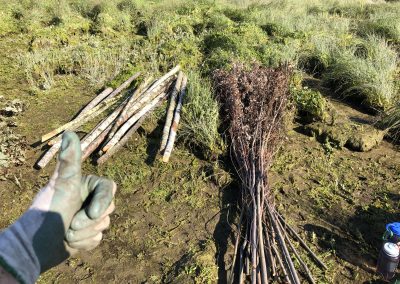 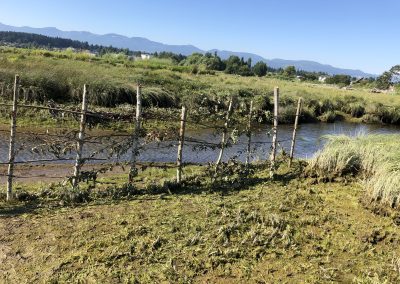 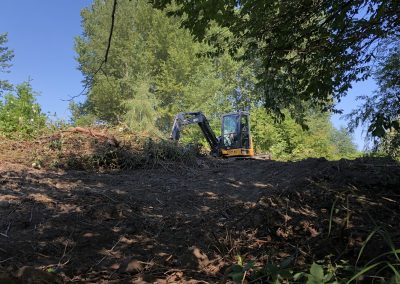 The week started off with a fun photo shoot with The Now Group showcasing our work at Kus-kus-sum for Clean BC, a provincial program to achieve the Province’s legislated climate targets. After the shoot, extensive weeding of Kus-kus-sum occupied the team for the rest of the afternoon.

Continuing from last week, Cain and Renée also checked the fish traps set in Glen Urquhart creek, moved any caught fish outside of the exclusion area and re-set the traps.  Both were excited to see that one trap had caught 46 fish! Cain enjoyed watching the Coho and stickleback fish in the creek. Monitoring the traps offered a much appreciated escape from the sun as the tall vegetation along the creek provides a lot of shade.  This is something the techs can look forward to every week because the traps will be checked and re-set on a daily basis.

Alder and willow fencing was constructed at the Airpark to prevent geese from eating the grasses. This involved weaving willow branches in between alder stakes and hammering them into the ground (pictured). Back at Glen Urquhart, weeding continued with the help of some of our fabulous volunteers – it’s great to have an extra set of hands on site! Blackberry bushes were trimmed and the resulting debris removed. Later in the week, Cain and Renée also got to learn how to pole sein! This is a method to capture fish in the creek using a long net with weights on the bottom. The net is dragged along a stretch of water to gather any fish that may be swimming by.

On Friday, the team started the morning with seal monitoring. It was forecast to be an especially hot day so everyone headed inside afterward to get some office work done and have a break from the sun. The final task of the week was to check the fish traps for the last time until next week.