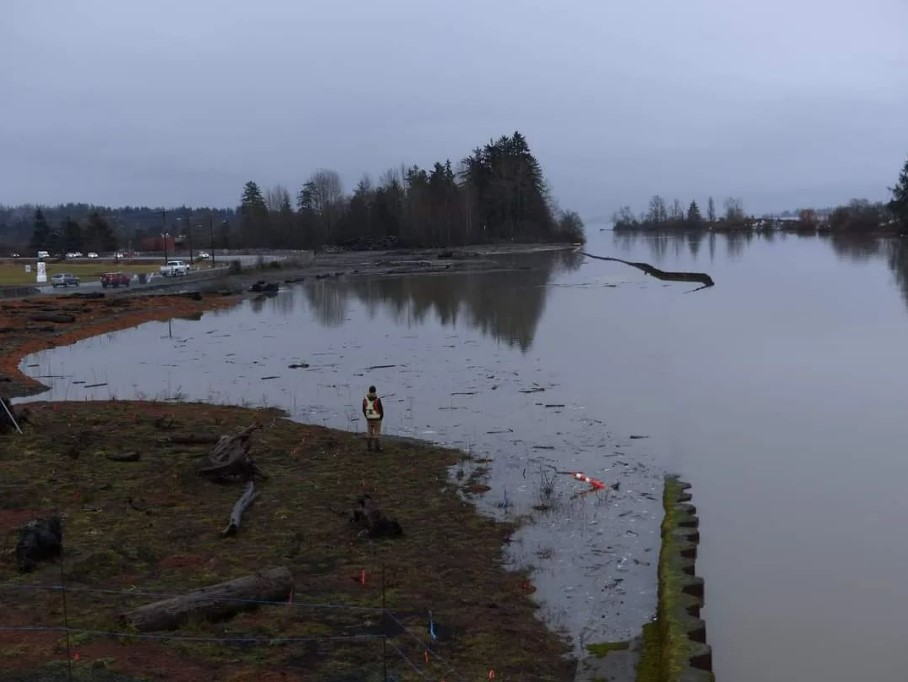 The planted areas of the site are already at final grade and the way they handled the water was a very positive example of what we can expect in the future. The berm that runs adjacent to Comox Road was about 0.75-1m above the current flooding levels. This bodes well for our design in future climatic conditions. The site now has more capacity to deal with substantial amounts of water and the upland area of the site is about a meter higher than it was when the site was paved.

Once the wall is removed (date to be determined), the part of the site that was underwater during the latest king tides will be tidally influenced. It will be a diurnally (twice daily) wetted brackish area known as a tidal marsh. Brackish environments have a salinity in between fresh water and ocean water. The plants that we transplanted in that area are salt-tolerant and thrive in these variable conditions. They are fast growing and dormant during the winter months. For these reasons, they should weather this inundation of water well. While there is always a small degree of mortality with new plantings, we do not expect higher than normal rates at this time.

The site is holding the water, which is slowly leaving through the south end. The south end has turbidity and erosion control measures in place, including silt fences, silt curtains, and a rock swale. We are monitoring the turbidity of the water in the river to make sure our site is not negatively impacting the water quality in the river. We are keeping a close eye on our erosion measures and continue to monitor turbidity levels. To maintain the effectiveness of our erosion control measures we plan on reinforcing them before the next king tides at the end of January (Jan. 21-26).