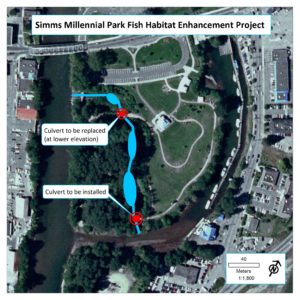 Our treasurer, Brian Storey, gave a positive financial report and thanked the Comox Valley Community Foundation for a grant that allowed our society to overhaul our aging computer systems. Director Dan Bowen and staff biologist Jennifer Sutherest summarized the work completed at Simms Park and the five year Coastal Restoration project  which includes the newly created salt marsh islands in Royston. Caila Holbrook, Manager of Outreach, Fundraising and Mapping, gave a review of the Glacier to Estuary materials created for School District 71, and the three new Signs of Abundance installed at Simms and Royston. 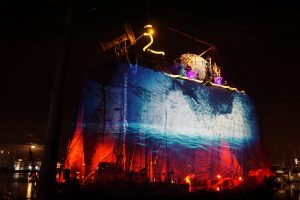 Director Kathy Haigh made note of some of the special contributions from the community over the year including a recent donation and pledge from the Old House Resort and Spa, and listed the exciting events coming up in June. These include Bike to Kus-kus-sum on June 2nd and the Nomadic Tempest Show June 28th, 29th, 30th and July 1st – all of which rely on volunteer support. She also announced that the Kus-kus-sum project has received $400,000 of funding from the Fish and Wildlife Compensation Program. Tim Ennis, Senior Project Manager for Kus-kus-sum, spoke to the viability of the Kus-kus-sum project, thanked everyone for their support, and reiterated the need for continued community support. 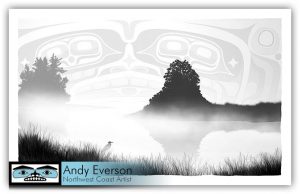 As an addition to the normal agenda Director Bill Heidrick presented a Keeping It Living Lifetime Achievement Award to David Stapley for his years of service and contributions to the health and protection of our local environment.
Elections were held and the Board of Directors from last year were all elected for a 2018/2019 term. It was noted that there are two vacancies on the board and that these can be filled at any time during the year.
Ernie Sellentin, our Keynote Speaker, spoke to the invasive plant issues in the K’ómoks Estuary and showed off the beauty of some of the native plants that live there.
Last but not least, winners of the Sensitive Habitat Sustainability Raffle were announced as follows:

Project Watershed Board and Staff congratulate the winners and thank all our prize donors, volunteers, members,  and supporters for their contributions over the year. 2018/2019 should be an exciting year as we strive to purchase the Kus-kus-sum site and work towards eelgrass and salt marsh restoration along 120 km of coastline!
[/av_textblock]