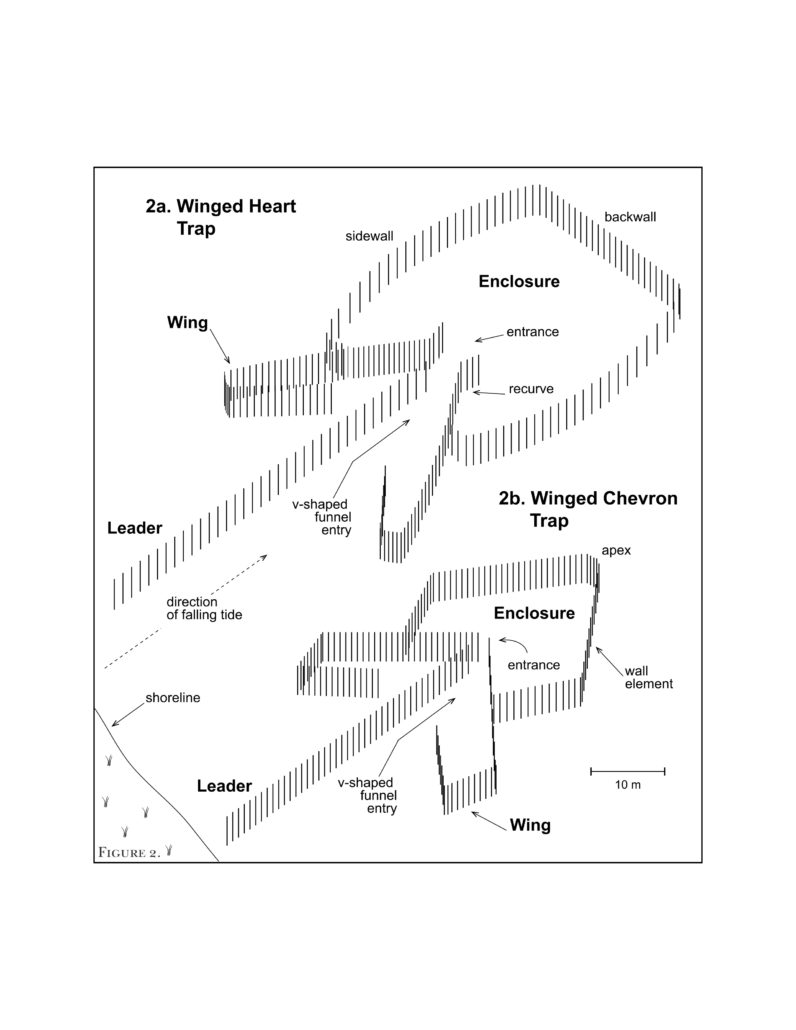 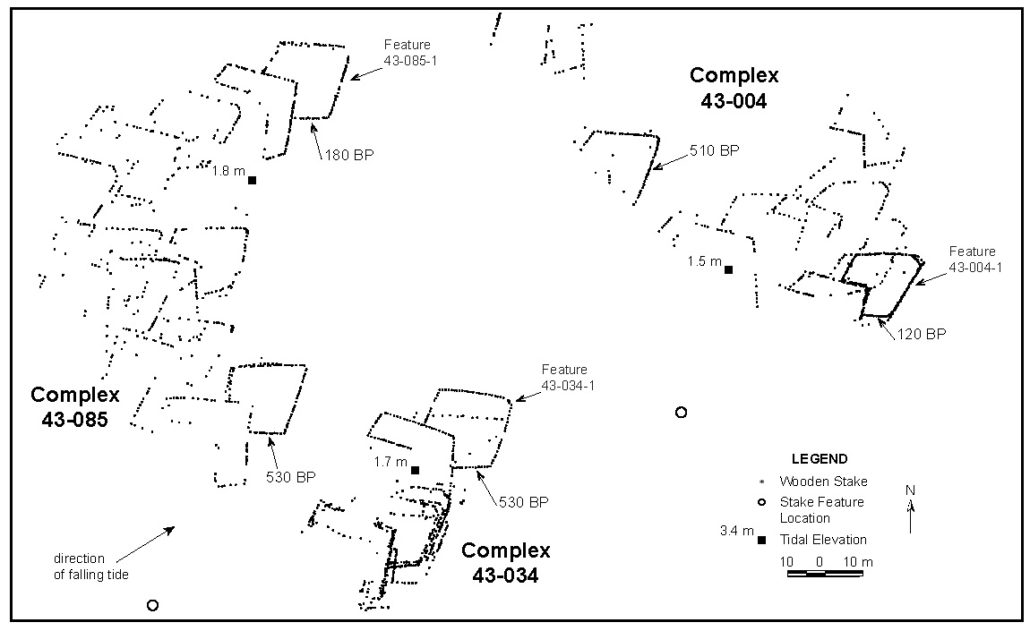 The Winged Heart and Winged Chevron traps (Figures 2a and 2b) are large-scale, structurally complex, similarly configured composite structures built with three components arranged along a central line. The leader (component 1) of each type is oriented more or less perpendicular to the nearest shore and is, thus, generally aligned with the direction of the falling tide. This linear alignment bisects a pair of bilaterally positioned wing structures (component 2) that form a wide-angle V-shaped funnel entry, open toward the shore, which terminates seaward at the entrance into a single fish impounding enclosure (component 3). (Fig 10.)

Both trap designs display bilateral axial symmetry and a high degree of consistency in form.

The calibrated range of radiocarbon dates indicates the traps cluster into two distinct periods: 27 dates obtained from Winged Heart traps indicate theses traps were built about 1300 and 800 years ago and 28 dates selected from Winged Chevron traps fall into a second cluster between about 600 and 100 years ago. (Fig 5.) 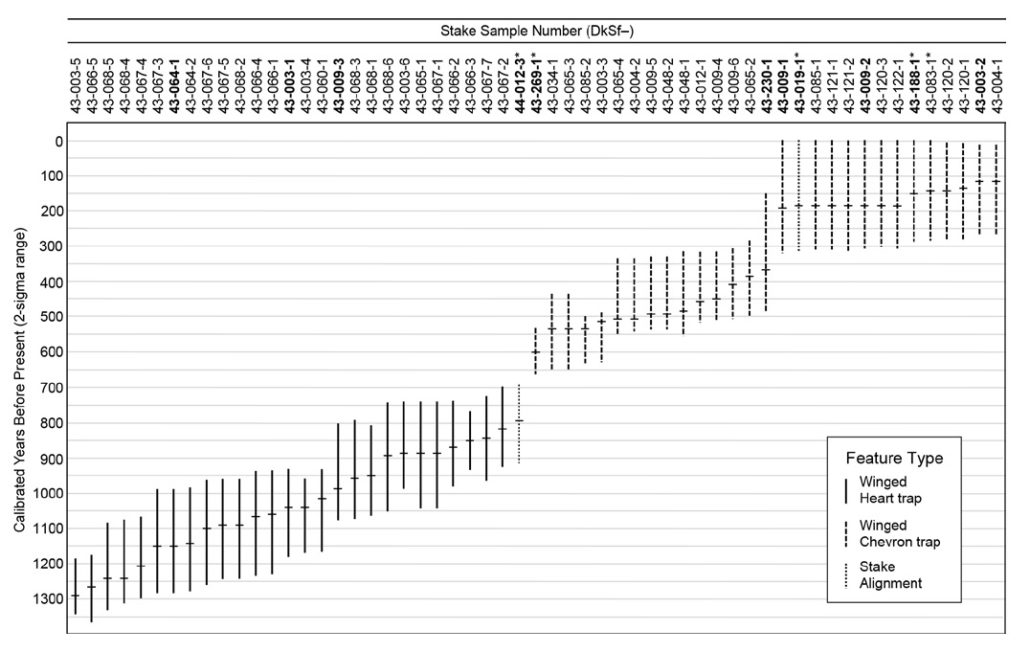 The shift in trap type about 700 years ago appears abrupt rather than transitional, and the dominant force driving the shift was likely a change in environmental conditions that altered northeastern Pacific Ocean fish productivity and availability at the beginning of the Little Ice Age. 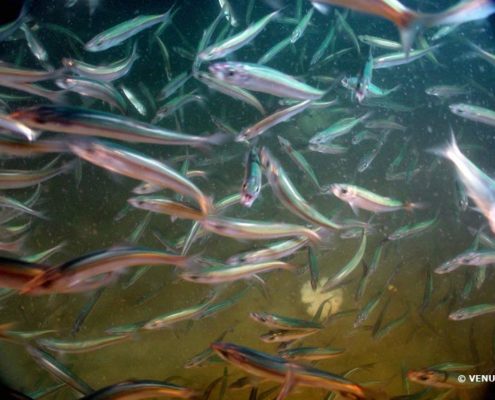 Based on the high degree of similarity in the overall configuration, sizes and entrance design characteristics of the Winged Heart traps to modern, large-scale, heart-shaped traps; high proportions of herring bones in Comox Harbour midden deposits (directly associated with trap features); and high herring productivity in southern British Columbia about 1,000 to 2,000 years ago, declining thereafter, we propose that the Winged Heart traps were built to target herring between about 1300 and 800 years ago. 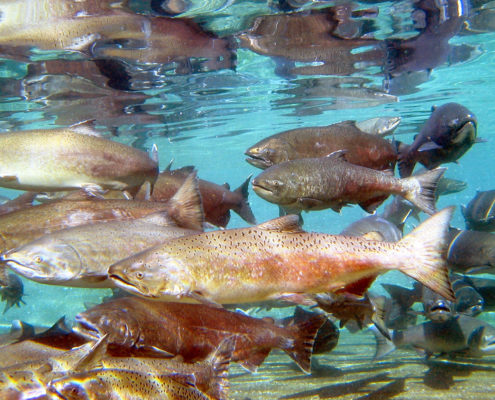 Based on the high degree of technological similarity of Winged Chevron trap design characteristics to historical salmon traps, the presence of salmon rivers at Comox Harbour, and the knowledge that salmon are more tolerant of risk and capable of swimming through narrow openings, we propose that the Winged Chevron traps were designed to target salmon in a specialized fishery beginning about 700 years ago. 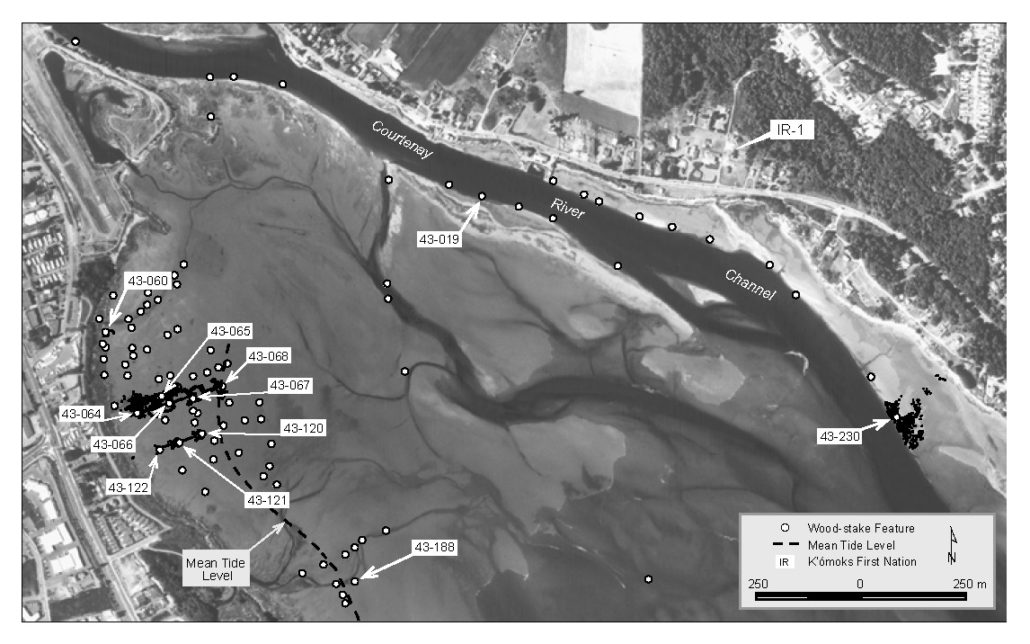 To our knowledge, no other intertidal fishing site has recorded the density of vertical stakes, conservatively estimated to be between 150,000–200,000.  Of these, the number of Winged Chevron Traps (Salmon Traps) exceeded the number of Winged Heart Traps (Herring Traps) by a ratio of about 2:1.

The most technologically sophisticated fishing structures at Comox Harbour are displayed in a large group of discrete trap complexes located close to the southwestern shore of the estuary near the Courtenay Airpark (Figure 4). 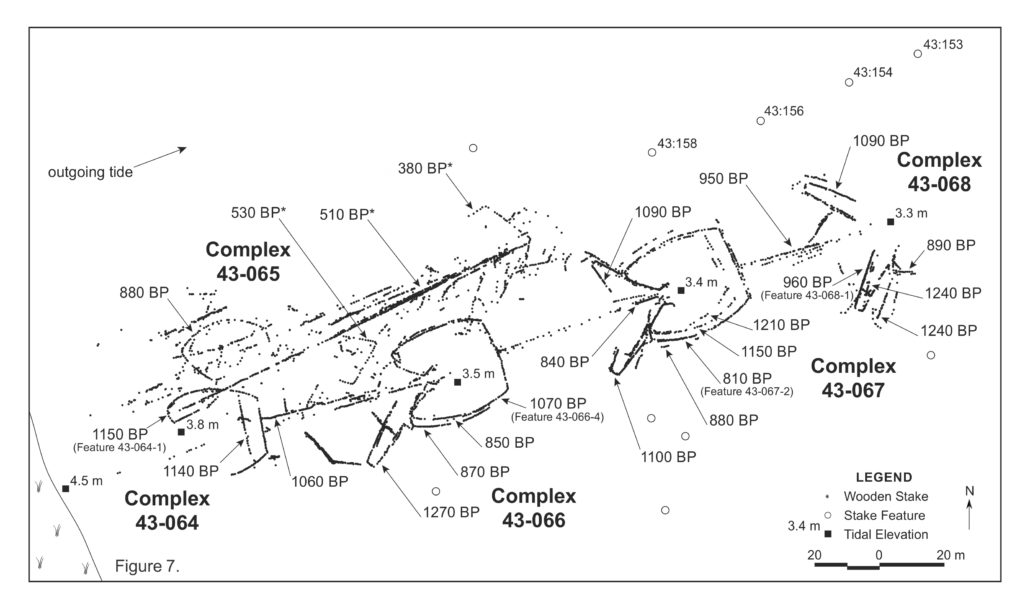 Results of mapping and radiocarbon dating [at this site] suggest that at least some of the Winged Heart traps may have functioned as components of a larger design of traps connected sequentially along a central line using leaders (Figure 7).

Multiple episodes of trap construction were recorded at each location and each feature is a complex of superimposed traps.

Both trap types functioned as individual stand-alone structures or systems of individual traps linked along a central line. Research indicates that both stand-alone traps and the linked systems were built and rebuilt repeatedly at the same locations over hundreds of years, with Winged Chevron traps succeeding Winged Heart traps in the same footprint. 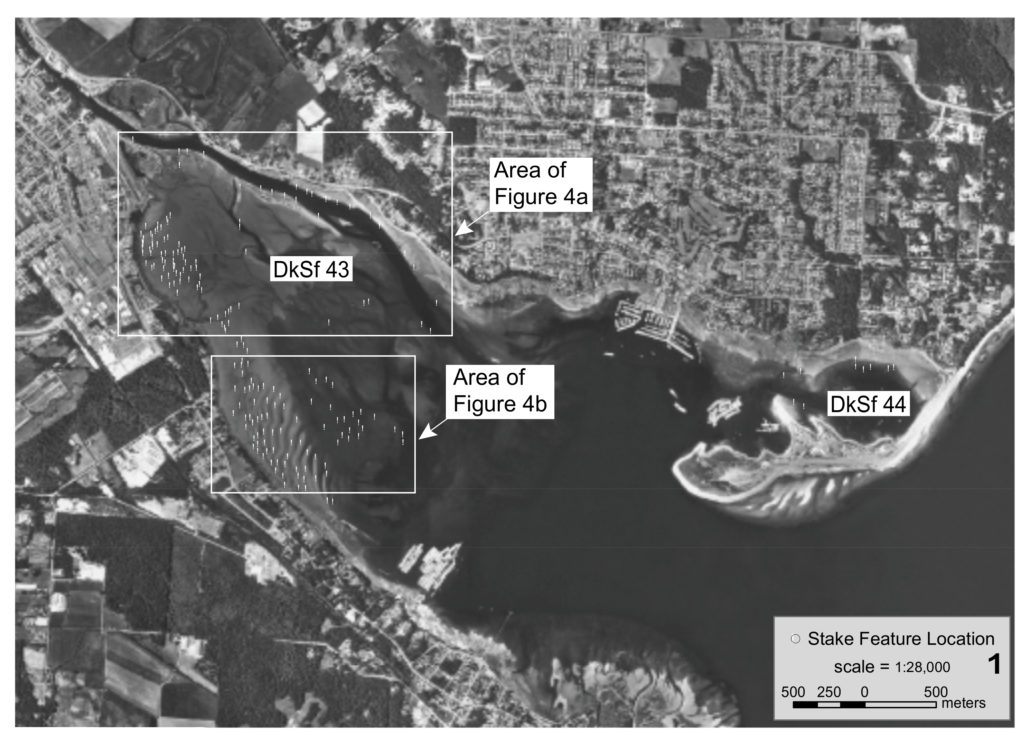 Termed a mass harvest fishing system, this linear arrangement of traps was aligned with the falling tide and often comprised three or four traps (possibly more) located at progressively lower tidal elevations. The complete structure would have been at least 300m in length.

The large sizes and numbers of traps, the concurrent use of multiple traps at particular times in different areas of the estuary, and the capability of the linked trap systems to fish for extended periods of time (i.e., across a range of tidal elevations) during a tidal cycle suggest a significant intensification of fish production at Comox Harbour over hundreds of years, particularly during the last 700 years. Such large-scale trap systems would have required skilled fishermen to design, construct and maintain the traps, and a high population density and organization of labour to efficiently process the fish for long-term storage and probably trade.

Such contemporaneous, large-scale fishing activity at multiple locations in the estuary could have resulted in the capture of enormous quantities of fish.

Such contemporaneous, large-scale fishing activity at multiple locations in the estuary could have resulted in the capture of enormous quantities of fish.

A large scale, technologically sophisticated intertidal fishery in Courtenay, British Columbia. The information on this page comes from Comox Valley Archaeologists Nancy Greene and David McGee. While it is not a Project Watershed project, we proudly support this body of work.

England’s monarchs were sacrificing to Woden and persecuting Christian missionaries when First Nations managed a vast, highly-productive, industrial-scale fish harvesting complex in the estuary of the Courtenay River.
At first, the elaborate arrangement of 300 ingenious traps on the sandy flats of the river mouth harvested herring, which still mass to spawn off the east coast of Vancouver Island every March.
But 700 years ago, perhaps in response to climate change, the technology was altered to exploit pink, chum, coho, chinook and possibly sockeye salmon.

This video was produced and prepared through the Comox Valley National Historic Site Committee, as a descriptive information piece to go along with the submission to the National Historic Sites and Monuments Board of Canada to respect, honor and give Historic Site recognition to the Ancient Wood Stake Fish Trap System studied by Community Archaeologist Nancy Greene and Geologist David McGee in the K’ómoks Estuary.

(Click the box icon in the top right corner of the document to view full size.)

By Lindsay Chung - Comox Valley Record, Published: December 02, 2010 "There are thousands of wooden stakes sticking out of the mud in Comox Harbour. The stakes are the remains of a large aboriginal intertidal wood stake fish trap site, which is creating a lot of...